“We wanted to rock the boat with the DECOY last year and I would say our definition of what an EMTB should be capable of hit the spot. We proved that it is possible to create a great looking enduro bike with a built-in shuttle that puts a smile on every rider’s face when shredding the gnarliest downhills and climbing up technical trails to drop back in again. After the mullet build last year, we are taking the DECOY a step further in 2020.”
– Markus Flossmann, CEO YT Industries

After the DECOY proved doubters wrong and demonstrated that EMTB’s can look good, feel great and deliver plenty of ‘Good Times’ both up and down the trails, YT embarks on a new mission with their new DECOY models. Both the Pro 29 and Base 29 model are categorized as all-mountain bikes as both geometry and kinematics of the bike have been adjusted for longer rides and highly efficient uphill performance, while 150 mm of travel still unleash that addictive adrenaline rush on technical downhill trail sections; very much to the liking of brand ambassador and World Enduro Super Series Champion Manuel Lettenbichler.

“I was stunned the first time I got to ride the DECOY 29. I was wondering how it would feel to handle an EMTB with 29’’ wheels? In short: unbelievable. The stoke was real powering up steep, technical uphill sections and sending it back down the trails. I am used to big hits and high speeds with my background and I have to say, this bike is just rad. YT has created a perfect all-rounder and new possibilities to send it in the upcoming season.”
– Manuel Lettenbichler, YT Family Member

In comparison to the E-enduro with its mullet set-up the DECOY 29 has been built with all-mountain terrain in mind. Both head and seat tube angle are steeper due to which the rider’s center of gravity shifts further forward and the chainstays are longer, allowing more pressure to be added to the front wheel on steep, technical climbs. The 29-inch wheelset will make quick work of any obstacles in the way and enables a convincingly smooth ride. The geometry can also be adjusted thanks to the Flip Chip, which drops the BB by 7 mm and results in a 0.5°-slacker head and seat tube angle if required. The Shimano E8000 motor and 540 Wh battery deliver powerful assistance on both the DECOY Pro 29 and Base 29 models. 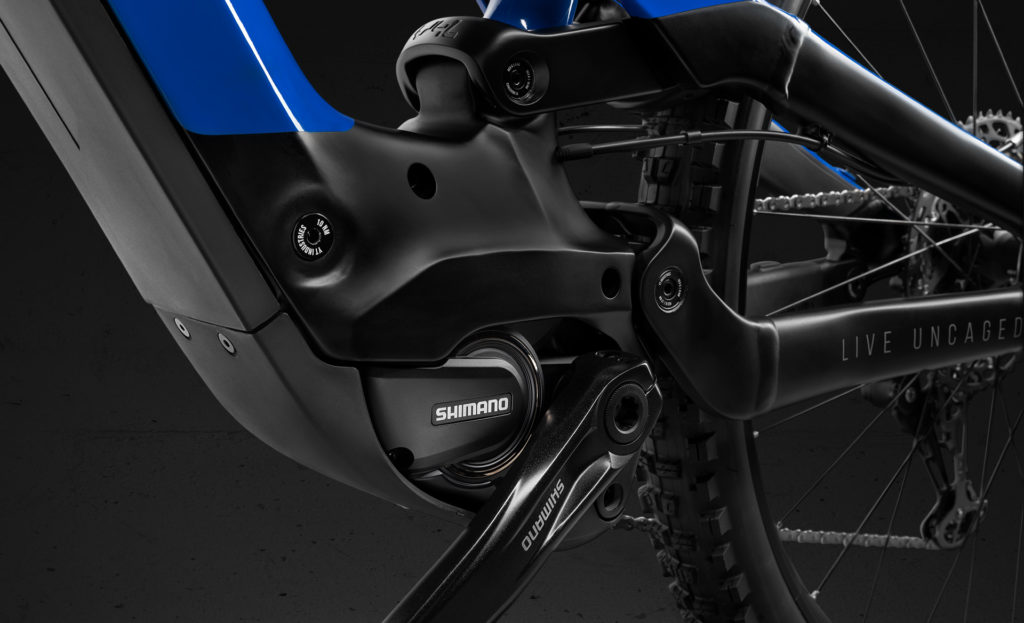 “Our current DECOY is made for riders that want an EMTB capable of riding a variety of aggressive off-road trails, but with a special emphasis on more technical and gravity or enduro oriented riding. While this is great for a lot of people, there are others that seek something different and the DECOY 29 could be a better choice. It’s ideal for people that live in less demanding or flatter terrain, but still want to have a real off-road EMTB. Whether you choose the DECOY or DECOY 29, YT’s EMTB bikes are always dedicated to real off-road riders, just like our other mountain bikes. For sure they can take you to the ‘biergarten’ also, but only after you ride every trail you can find.”
– Chris Hilton, CTO YT Industries

The Pro 29 model comes with a FOX 36 FLOAT Performance Elite E-Bike+ fork and 150 mm travel creating a sensation of complete control in the most technical terrain and is complemented with the high-performance FOX FLOAT DPX2 Performance Elite rear shock. The 12-speed Deore XT drivetrain from Shimano ensures precise gear shifting while the SRAM Code RSC brakes deliver the necessary braking power. The Base 29 model is an entry-level EMTB with high-tech spec. Equipped with 150 mm of front travel courtesy of the RockShox Yari RC and RockShox Deluxe Select rear shock the Base model is well-prepared for every challenge that may come the rider’s way. The 12-speed Shimano SLX drivetrain ensures riders always find the right gear at the right time to get the job done. Both the Pro 29 and Base 29 models rely on DT Swiss wheels and MAXXIS Minion DHR II tire combinations that deliver superior traction in the most difficult conditions. 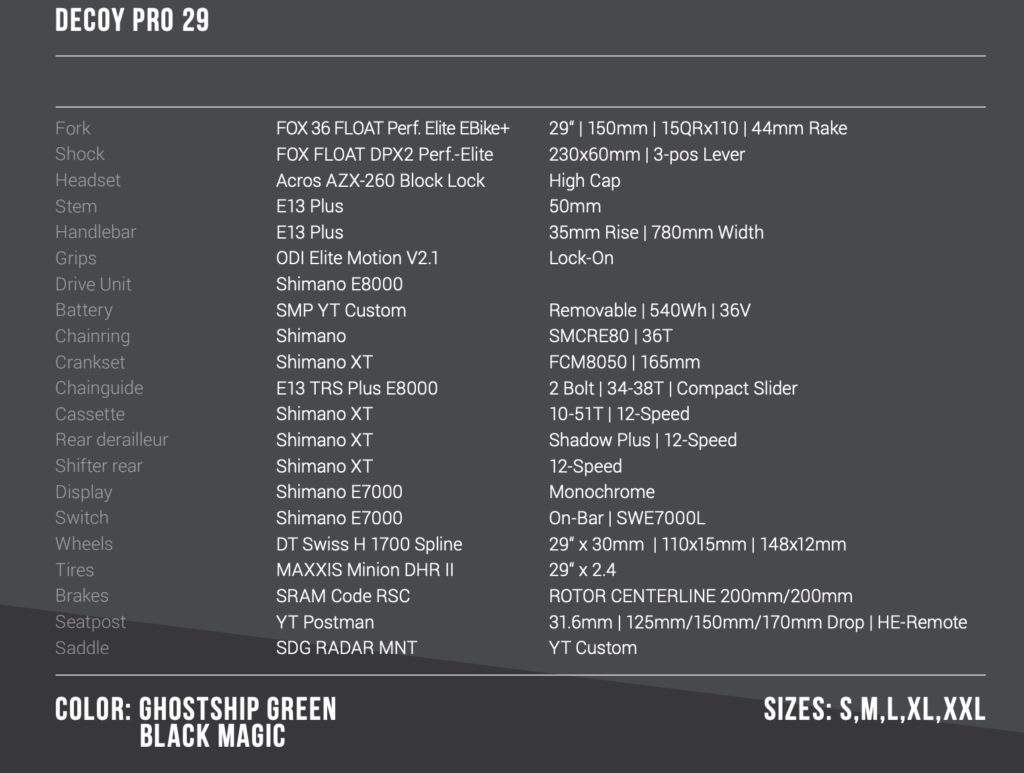 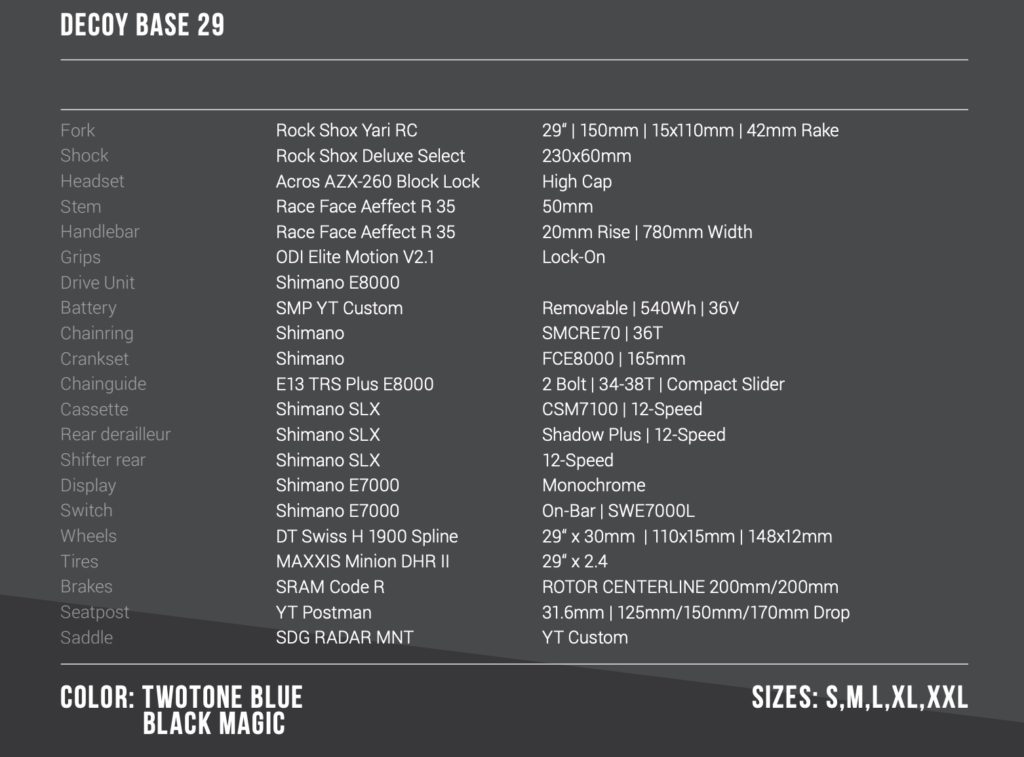